THE RIDDLE OF DMITRI 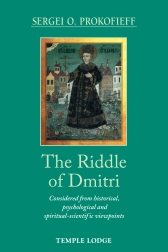 In a private conversation on his deathbed, Rudolf Steiner informed his friend Count Polzer-Hoditz of three spiritual problems that would need to be resolved in the coming years: ‘Firstly, the question of the two Johns [John the Baptist and John the Evangelist]. Secondly: Who was Dmitri? Thirdly: Where did Caspar Hauser come from?’ Tackling these issues, said Steiner, would be of critical importance for humanity’s future. He added: ‘In all three problems it is important that one’s gaze is directed not towards death but towards birth. Where did they come from and with what tasks?’ In Dmitri’s case, Steiner emphasized that the most important thing was to discover what was to have been achieved through him.

Utilizing the significant clues left by Rudolf Steiner, Sergei O. Prokofieff takes on the second of these tasks, the great unsolved mystery of Russian history. Tsarevich Dmitri, the son of Tsar Ivan the Terrible, was tragically murdered as a young boy. Later, he was impersonated by a series of rogues and pretenders. Prokofieff’s wide-ranging study integrates historical, psychological and spiritual-scientific perspectives to work towards the truth behind Dmitri’s brief life, his mission and the distortions created by the ‘false Dmitris’. He also examines the significance of Friedrich Schiller’s unfinished play, Demetrius.

SERGEI O. PROKOFIEFF (1954-2014) studied Fine Arts and Painting at the Moscow School of Art. He encountered the work of Rudolf Steiner in his youth, and soon decided to devote his life to it. He became active as an author and lecturer in 1982, and helped found the Anthroposophical Society in his native Russia in 1991. In Easter 2001 he was appointed a member of the Executive Council of the General Anthroposophical Society in Dornach, Switzerland, a position he held until his death. A popular speaker, he wrote many books and articles that are published in various languages.