A New Approach to Evolution 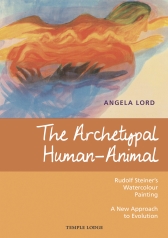 Rudolf Steiner’s watercolour painting ‘The Archetypal Human-Animal’ presents us with the enigmatic image of a strange creature apparently swimming in water. It has a human profile, showing a clearly outlined nose and slightly-opened mouth, with a mysterious eye, almost concealed in its greenish hair. It has appendages similar to hands and feet, and dark-blue plant-like forms float about in the water beneath the creature’s bright red and yellow body. Only the title provides us with a clue to its meaning: it is an ‘archetypal human-animal’ form. But even this is enigmatic. What is this strange, unusual creature – this archetypal human-animal? We are presented with a perplexing image and a puzzling description.

In this original work, illustrated throughout with full-colour paintings and images – many by the author herself – Angela Lord takes us on a journey of discovery to realizing the meaning of Rudolf Steiner’s painting. From Goethe’s theory of metamorphosis in nature, we are introduced to Steiner’s ideas of human evolution, from the primal beginnings of the archetypal human-animal on ‘Ancient Moon’. Lord recounts myths and legends from many cultures that tell of human-animal forms, and reflects on the meaning of the fish in Christianity. She takes us through a series of ‘colour sequences’ for repainting Steiner’s human-animal motif, and includes appendices that summarize evolutionary phases of the earth and humanity from a spiritual-scientific perspective.

The Archetypal Human-Animal is both a valuable workbook for painters and a fascinating insight into hidden aspects of human evolution.

ANGELA LORD is a painter, interior colour designer, muralist and art educator. Born in Christchurch, New Zealand, she studied with Gerard Wagner at the Goetheanum Painting School in Dornach, Switzerland. She teaches painting and offers a diploma recognized by the Art Section at the Goetheanum. Her publications include The Archetypal Plant, Rudolf Steiner’s Watercolour Painting; New Life – Mother and Child, The Mystery of the Goddess and the Divine Mother; Art, Aesthetics and Colour, Aristotle – Thomas Aquinas – Rudolf Steiner; Colour Dynamics; Easter, Rudolf Steiner’s Watercolour Painting and two books on Creative Form Drawing.