THE LANGUAGE OF THE STARS

Zodiac and Planets in Relation to the Human Being

The Cosmic Rhythm in the Creed 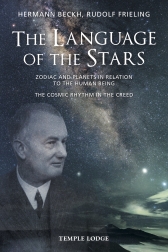 ‘Astrology is a concern of the Christ and the work of Michael.’ – Hermann Beckh

During the brief window between the two World Wars, the Rev. Prof. Hermann Beckh led research at The Christian Community Seminary in Stuttgart. In those precious years he published on music, the gospels and the ancient Mysteries. By 1930, in his Contributions to the Priests’ Newsletter, he had produced the most far-reaching account of the cosmic order ever written. The typescript of this great work was destined to gather dust in the Berlin Archiv, however, until it was discovered in recent years. Published here for the first time, it is the crowning masterpiece to Beckh’s Collected Works. The translated and annotated text is accompanied by Rudolf Frieling’s in-depth application of Beckh’s principles of the cosmic starry order to the Creed of The Christian Community, and by a number of appreciations and relevant book reviews.

Through ever-deepening meditation guided by Rudolf Steiner, and his vast knowledge of Tibetan, Sanskrit, Pali and Avestan sacred texts – scarcely to be equalled in Europe at the time – Beckh came to the first-hand realization that human and cosmic life was ordered. He perceived directly that this cosmic order was: good, as originating from the World-Will; true, as from World-Thinking; and beautiful, as from World-Feeling. All three could be personally experienced in disciplined consciousness that could enter dream, sleep and pre-natal life. This, then, was Beckh’s method and inspiration, as shown in this extraordinary work.

‘The time will come when Beckh’s “Christened” star-knowledge, which signifies a basic overturning of today’s decadent astrology, will be appreciated for its significance.’ – August Pauli

RUDOLF FRIELING (1901-86) was born in Leipzig, Germany. He studied Theology and Philosophy and helped found The Christian Community, a contemporary movement for religious renewal, in 1922. He became the leader of The Christian Community in 1957, serving until his death. He is the author of several books on Christianity and the Bible.