THE MYSTERY OF MUSICAL CREATIVITY

The Human Being and Music 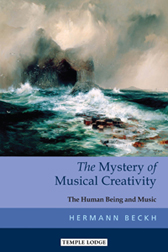 Lost for decades, the manuscript of Hermann Beckh’s final lectures on the subject of music present fundamentally new insights into its cosmic origins. Beckh characterises the qualities of musical development, examines select musical works (that represent for him the peak of human ingenuity), and throws new light on the nature and source of human creativity and inspiration. Published here for the first time, the lectures demonstrate a distinctive approach founded on the raw material of musical perception.

Beckh discusses the whistling wind, the billowing wave, the song of the birds and particularly the theme of longing. Never losing the ground from under his feet, he penetrates perennial themes: from the yearning for real spontaneity and the ‘Mystery background’ uniting heaven and earth, to spiritual knowledge that can meet the demands of the twenty-first century. Out of the cosmic context, Beckh writes to the individual situation. From there, he seeks again the re-won cosmic context. He does not write as a musical specialist and then turn to universal human concerns; rather, Beckh writes from universal human concerns and reveals music as of special concern to everyone.

In addition to the transcripts of fifteen lectures, this book contains a valuable introduction and editorial footnotes. It also features appendices including Beckh’s essay ‘The Mystery of the Night in Wagner and Novalis’; reminiscences of Beckh by August Pauli and Harro Rückner; Donald Francis Tovey’s ‘Wagnerian harmony and the evolution of the Tristan-chord’, and several contemporaneous reviews of Beckh’s published works.