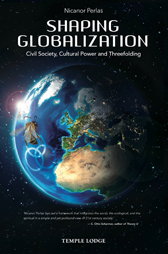 ‘Nicanor Perlas has written a brilliant exposition of a new viewpoint in social theory and practice, one that applies to all of us in our everyday lives.’ — Paul H. Ray, author of The Cultural Creatives

‘Nicanor Perlas lays out a framework that integrates the social, the ecological, and the spiritual in a simple and yet profound view of 21st century society.’ — C. Otto Scharmer, author of Theory U

Civil Society has become a major power in the world. The stunning defeat of the controversial and secretive Multilateral Agreement on Investments, the massive worldwide WTO protests and the yearly meetings of the World Social Forum are testimony to its coming of age. From these significant victories, civil society continued to catch world attention with the Arab Spring, the grassroots movement that helped elect former US President Barack Obama and the significant gains of the anti-fracking campaign. With tens of millions of citizens and over a trillion dollars involved in advancing its agenda, civil society now joins the state and the market as the third key institution shaping globalization. However, it cannot fully mobilize its resources and power as it currently lacks clear understanding of its identity.

Shaping Globalization argues that global civil society is a cultural institution wielding cultural power, and shows how – through the use of this distinct power – it can advance its agenda in the political and economic realms of society without compromising its identity. Nicanor Perlas outlines the strategic implications for civil society, both locally and globally, and explains that civil society’s key task is to inaugurate ‘threefolding’: the forging of strategic partnerships between civil society, government and business. Such authentic tri-sector partnerships are essential for advancing new ways for nations to develop, and for charting a different, sustainable type of globalization. Using the model of the Philippine Agenda 21, we are shown how civil society and progressive individuals and agencies in government and business are demonstrating the effectiveness of this new understanding to ensure that globalization benefits the environment, the poor and society as a whole.

NICANOR PERLAS is an adviser, global activist, writer and speaker on artificial intelligence, globalization and spiritualized science. He has advised UN agencies, the Office of the President and Congress, as well as cities and towns undertaking large-scale social threefolding projects. He has headed global and national civil society networks that were responsible for stopping 12 nuclear power plants, banning 32 pesticide formulations and bringing about mainstream sustainable development, including organic farming in the Philippines. Perlas is a member of the Senate Task Force on Artificial Intelligence. For the global impact of his work, he has received the Right Livelihood Award (Alternative Nobel Prize), the Outstanding Filipino Award and UNEP’S Global 500 Award. He is the author of Humanity’s Last Stand, The Challenge of Artificial Intelligence.