and the Messianic Expectations of the Essenes 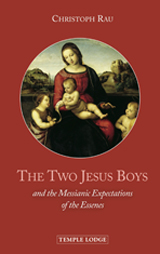 The two contradicting genealogies of Jesus in the Gospels have long puzzled biblical scholars. Rudolf Steiner’s spiritual research led him to the controversial theological conclusion that historically there existed two Jesus boys, born of two holy families. These two boys, he said, were necessary as part of the spiritual preparation of forming a suitable human body for the incarnation of Christ into the earthly realm. Both apocryphal texts and the writings of the Essenes – as discovered at Qumran by the Dead Sea – now appear to support this conception, with references to Messianic figures from both royal and priestly lines.

Various authors have developed Rudolf Steiner’s observations – first presented in the early twentieth century – although much of this literature has lacked the rigour of accurate and broad scholarship. The Two Jesus Boys is not simply a derivative rehash of these previous publications. Rather, it offers a fresh investigation of primary sources, coupled with an objective determination to allow the facts to speak for themselves. Christoph Rau thus comes to the unavoidable conclusion that Steiner’s presentation of the chronology of the two births needs revision; furthermore, the most recent discoveries and interpretations of Essene scrolls reveal that the Jewish sect expected not one but three Messiahs.

Rau quotes from and analyses numerous documents from the landscape of early Christianity and Judaism. His findings provide a secure foundation for the historical existence of two Jesus boys in the prelude to Christ’s incarnation on earth, as well as a revelation of the Essenes’ long expectation of three Messiahs.

CHRISTOPH RAU was born in 1928 in Groß Naundorf, Kreis Pulsnitz (Oberlausitz) in Germany and grew up in a Lutheran vicarage. He read theology in Berlin and Rostock, trained in music in Leipzig and finally as a priest of The Christian Community in Stuttgart. For decades he researched the structure of the Gospels, publishing the results in monographs on Matthew, Mark and John (Stuttgart 1972) and a comprehensive work, Die Vier um den Einen (Bochum 2008), on the four Gospels and their authors. He co-edited the German translations of the New Testament by Emil Bock (1980) and Heinrich Ogilvie (1996) and edited the literary estate of Michael Bauer in five volumes (Stuttgart 1985-97) also writing his biography, Michael Bauer und seine Lebensbegegnung mit Friedrich Rittelmeyer (Dornach 1995).