Contemplations on the Months of the Year

Twelve Women who Changed the World 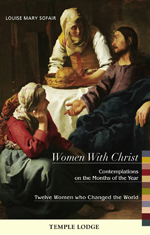 In a rich contemplation of Christian life and practise, Louise Mary Sofair relates the events in the Gospels to the rhythms of the year. Viewing the key Christian festivals from the perspective of the twelve months of the yearly cycle, she points to relevant events in the Gospels, focusing on the role of women. In the second part of the book she celebrates the biographies of twelve influential women who played significant roles in humanity’s development – from the medieval Clare of Assisi and Eleanor of Castile to the more recent Edith Stein and Ita Wegman.

In her concluding chapter, the author discusses the meaning of the Eternal Feminine and its implications for the future of humanity. With reference to the Book of Revelation she describes how, ‘...the united masculine, spiritual element and feminine, higher-soul element of the future human being... gives an invitation to all those who wish to share in the community of eternal Life.’ Although centred on themes of feminine spirituality, this book is relevant to anyone interested in the task of personal transformation and the healthy progress of the human race.

LOUISE MARY SOFAIR was born in Central Africa in 1953 and studied speech and drama in England. She became the principal of a drama studio, also teaching privately at home and abroad. Later she taught at the King’s Langley Rudolf Steiner School where she specialised in drama and religion and was active in many aspects of school life, including pastoral care. Having brought up four children, she is now retired but continues to write, study and to support the work of the Christian Community church.