ATTACK OF THE ENEMY

The Occult Inspiration Behind Adolf Hitler and the Nazis 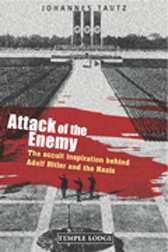 The time of Nazi dictatorship in Germany (1933-45) consistently stimulates more interest than any other period of human history, as witnessed by the countless books and other media on Adolf Hitler and his leading henchmen. What is the basis for this enduring fascination? And, does the abundance of available material help us truly to understand the phenomenon?

In this clear-sighted study, Tautz concludes that there is an existential need for the human psyche to come to terms with the forces of destruction that broke out during the era of National Socialism. In an attempt to get to the essence of the phenomenon, he employs the method of "historical symtomatology", as developed by the philosopher and scientist Rudolf Steiner. Through these means, "... the historical process is perceived as the physiognomic expression of spiritual forces". By viewing events as symptoms, the outer facts become transparent to the hidden influences that lie behind them, and occult aspects are revealed.

Tautz focuses on the degenerate elements that inspired National Socialism - their meaning, nature and methods - and examines their manifestation in earthly events. He reveals the spiritual context in which these adversary, opposing forces erupted and attacked humanity - at a time when human consciousness had stepped over a new threshold. The Nazi functionaries and their spectral leader, whom he refers to as "the Medium", willingly served these powers, whilst the bedazzled masses were largely passive. If we are serious about developing an egalitarian society today that corresponds to the present level of human evolution, he argues, we need to understand this period of tyranny in Germany at the deepest levels.

In addition to Tautz’s classic text, a new Appendix by Andreas Bracher brings the reader up to date with a survey of relevant literature on the theme as well as an insightful review of the Nazis’ attitude to Rudolf Steiner and the anthroposophical movement he founded. Contemporary extracts from the Völkische Beobachter (the Nazi’s house journal) indicate the viciousness and hatred directed towards Steiner and anthroposophy by the National Socialists.

JOHANNES TAUTZ – author, historian, religious scholar, anthroposophist and Waldorf teacher (at the first Steiner school in Stuttgart, Germany) – was born in 1914 in Koblenz. He studied German and History, graduating with a dissertation on Schelling. The author of W.J. Stein, A Biography, he lives in Darmstadt, Germany.