Nutrition of the Future 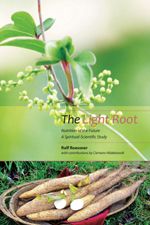 "This plant is the only one which is in a position to store light ether; this will be indispensable for people in future." - Rudolf Steiner

Koberwitz, Whitsun 1924: Rudolf Steiner had just completed his momentous lecture course on biodynamic agriculture and was waiting for a car to take him to the station. Suddenly he was approached by two of his pupils with an urgent question: Would his new indications for treating soil and vegetables be sufficient to provide, "...nutrition appropriate to our times and in accordance with the spirit?" Steiner's frank response was somewhat surprising: "It will not be sufficient even in the most favourable circumstances. What should be done is to cultivate the Dioscorea batatas in Europe so that it can take over from the potato as the staple diet."

In the many decades since that conversation, various attempts have been made to cultivate Dioscorea batatas - the "light root" - in Europe, initially by Steiner's close colleague Guenther Wachsmuth. More recently, biodynamic farmer Ralf Roessner began to research the plant and its background, but soon discovered problems with the specimens available in Europe. Unsatisfied with the standard of the plants, in 2002 he travelled to the original growing areas of Dioscorea batatas in China, where he was able to form a comprehensive picture of the best planting methods and conditions. "The nodules which I found and brought back with me", he writes, "showed similar light ether characteristics to the original plants of Wachsmuth".

Having successfully cultivated and marketed this light root, Roessner presents some carefully assembled introductory materials based on his experiences and those of a colleague. This small book, illustrated with colour images, is intended for people who wish to discover more about the plant's being and spiritual mission as a "helper of progress". Roessner explains how the light root stores "light ether" in a unique manner, making it not only a valuable food, but also a "carrier of the spirit". This light root could even "...decisively influence the development of humanity and the earth". Aside from studying esoteric aspects, he gives answers to frequently-asked practical questions about the plant and its cultivation.

RALF ROESSNER is a passionate bee keeper and a biodynamic farmer, cultivating and processing the "light root" (Dioscorea batatas), which his company IMTON GmbH develops and markets. In addition, Ralph has been working in the field of water research for 20 years. As an ex-Waldorf school teacher he is interested in all new developments in education, and as a father of two grown up children he aims to be in touch with the pulse of the times. All the above informs his quest for healthy nutrition for the future through meditative as well as experimental research into subtle matter.