WHY BECOME A MEMBER OF THE ANTHROPOSOPHICAL SOCIETY? 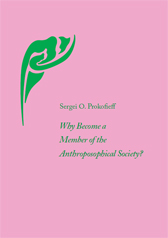 "With these considerations, it is not the author's concern to persuade the reader in an outward way to join the Anthroposophical Society. He is concerned with the communication of a few esoteric viewpoints and possible motives, so that the decision in this regard can develop in a fully-aware and responsible manner, based on a solid inner cognitive foundation. For only when the decision in regard to membership in the Anthroposophical Society - for whatever reason the individual might make it - occurs on such a basis, does it also have spiritual justification." (From the Preface)

SERGEI O. PROKOFIEFF, born in Moscow in 1954, studied painting and art history at the Moscow School of Art. He encountered anthroposophy in his youth, and soon made the decision to devote his life to it. He has been active as an author and lecturer since 1982, and in 1991 he co-founded the Anthroposophical Society in Russia. In Easter 2001 he became a member of the Executive Council of the General Anthroposophical Society in Dornach. He is the author of many books, more than 25 of which have been published in English translation.