THE HEAVENLY SOPHIA AND THE BEING ANTHROPOSOPHIA 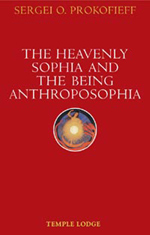 Based on the author's own experience of the supersensible being who stands behind the science of the spirit known as Anthroposophy, The Heavenly Sophia is the culmination of 25 years of work by Sergei Prokofieff on Rudolf Steiner's spiritual impulse. The being Anthroposophia, he shows, is not a poetic image or an abstract concept, but is an actual spiritual entity who works in the higher worlds for the good of earthly evolution, bringing to humanity "...the new revelation of the heavenly Sophia, the divine wisdom".

In the first part of the book the author describes the path which led him to experience the being Anthroposophia - a path which is clearly related and can be followed by the reader. In the second part, using the few statements Rudolf Steiner made on the subject as his starting point, Prokofieff studies the question of the position of the living being Anthroposophia in the hierarchic cosmos, namely her relationship to Christ, the heavenly Sophia and the Archangel Michael.

Finally available in paperback, this book will be of interest to anybody with a close connection to Rudolf Steiner's Anthroposophy.