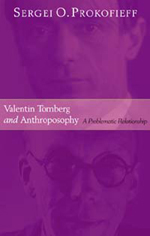 Valentin Tomberg was for many years a strong proponent of the science of spirit, anthroposophy, founded by Rudolf Steiner. He became prominent as a lecturer and writer, but in 1945 turned away from anthroposophy and converted to Roman Catholicism, authoring two influential Catholic texts. Nevertheless, a number of Tomberg's modern-day followers have maintained that he remained faithful to esoteric Christianity and Rudolf Steiner.

In this revealing booklet Prokofieff presents startling new research, which at the very least shows the above hypothesis to be misguided. His key evidence is the text of a letter, reproduced in its entirety, handwritten by Tomberg in 1970, which demonstrates the full extent of his condemnation and dismissal of his former spiritual path and teacher.

SERGEI O. PROKOFIEFF was born in Moscow in 1954, and studied painting and art history at the Moscow School of Art. He encountered anthroposophy in his youth, and soon made the decision to devote his life to it. For years he has been active as a lecturer and author.