MORE MESSAGES FROM THE ANGELS

Preparing to Receive, Verifying and Confirming the Truth 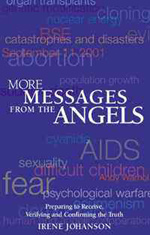 As with her previous work What the Angels Need to Tell Us Now, this book is divided into two parts. In the first section Irene Johanson gives valuable advice about the inner preparations necessary to receive angel messages in the proper way. She explains how to distinguish between the different kinds of spirits, and how to deal with information received from metaphysical entities - in particular knowing whether such information is genuine or not. She also gives advice about transforming our life of soul and the forces of thinking, feeling and will. In the second part of the book she presents more messages and information received from angels through her friend Agnes, an individual who represents a new kind of clairvoyance. Unlike mediumism or channelling, Agnes' method does not entail a dimming of consciousness, but has the character of clarity and wakefulness.