THE FUTURE IS NOW

Anthroposophy at the New Millennium

Edited with an Introduction by Sevak Gulbekian 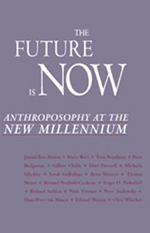 The spiritual teacher Rudolf Steiner referred to the period of time encompassing the end of the twentieth century and the beginning of the new millennium as one of great spiritual struggle. Forces of destruction would wage war against forces of good, and the future of culture and civilization would depend on the outcome. In his many statements on the matter, he directed words of warning in particular to members of the Anthroposophical Society and movement. They would be called upon to develop spiritual qualities which would be crucial to the furtherance of human development.

This compilation, featuring 18 essays by Temple Lodge authors, is published to coincide with the turn of the millennium. The contributorswere asked to offer their thoughts on the question of where the earthly manifestation of Anthroposophy stands at the present time, and to what extent it is fulfilling its tasks. This book contains their answers - a commentary for the challenging times ahead, and a chance to reassess, prepare and be awake.